This table of the GST HST rates by province since it began on January 1, 1991 is an excellent reference for bookkeepers doing backwork. It is especially helpful when doing 2010 bookkeeping as the sales tax rates and rules were in transition across Canada. New place of supply rules came into effect on July 1, 2010.

Looking for Tax Compliance Filing Deadlines and Due Dates?

How To Calculate The Provincial Part of HST

The CRA publishes the current and historical GST HST rates on their website at Businesses> GST/HST > GST/HST rates.

*How To Calculate The Simplified GST HST Rates

The simplified GST/HST rate for purchases is calculated as follows:

It is my understanding that if you use the simplified method, you should have been self assessing HST between October 14, 2009 and April 30, 2010 ... holding and remitting after the June 30, 2010 reporting period.

When does it become mandatory to register for GST/HST?

If you own a business in Canada, you must register for GST and collect it if your annual sales is greater than $30,000.

Registration under $30,000 in sales is optional. If you are starting up your business and your sales will be less than $30,000, you should still register. It allows you to recover your input tax credits (ITCs) on start-up costs and normal purchases. 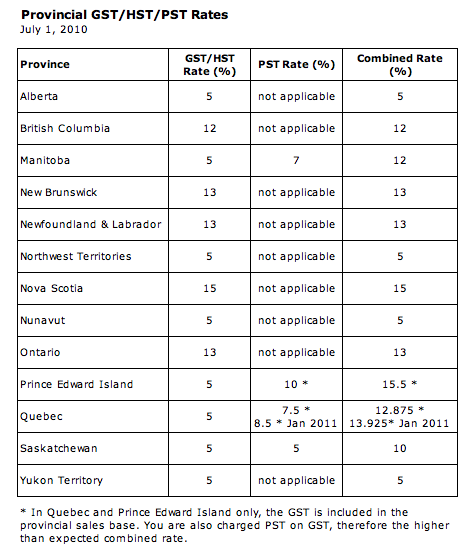 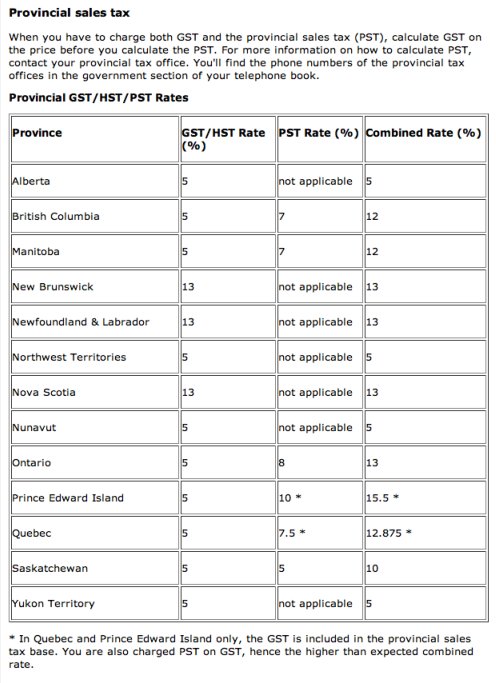 Source: You used to be able to find the above list at the Canada Business website. The rates were located in the Canada-Saskatchewan GST/HST service section ... about mid-way down the page. The site has since been revised and I can no longer locate the table.

What I really liked about the table was that it included the effective combined rates for PEI (prior to April 2013) and Quebec (prior to January 2013) as they charged PST on GST.

With the introduction of different HST rates in BC and Nova Scotia on July 1, 2010, this simplified method of accounting may require a bit more paperwork than before ... depending on your customer base.

You now need to track your sales by the four groups:

As this topic is a bit more complex now, the GST HST Quick Method rates are now are their own page.

See you on the next page ...
Your tutor Lake

Copyright © 2009-2022 by L Kenway dba Lakeshore Bookkeeping Services
All Rights Reserved. Do not duplicate without permission.